Opened a place of worship at Norwich Road in 1861.

Cawston Methodist Chapel was built in 1861. The land was purchased from Mr W. Tuddenham for the princely sum of £10-00. the contract for the building was £99-00. It was built by a Mr R. Skipper. The previous' chapel a wooden structure in Brandiston Road was sold for the magnificent sum of 15 shillings (75p). The new chapel was opened for worship on Sunday, November, 10th, 1861. A certain Mr. W. Wilkin advanced the sum of £60 at 5 per cent towards the cost of the chapel; inflation had not been heard of!

There were 60 members at that time; now alas it is slightly less. The school room at the rear was added in 1954 and the first wedding took place in 1956. Ninety-five years later than the opening of the chapel. A good reason being that it was not previously Licensed.

The chapel was heated by a solid fuel stove and lighting was by candles and oil lamps. Now it is electric heating and lighting; but we hope that the light from the original candles and oil lamps will continue to shine from Norwich Road Chapel in another form, and thereby keep alive, what is after all, part of the heritage of Cawston - during our 130 anniversary year. 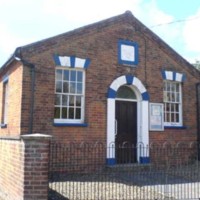